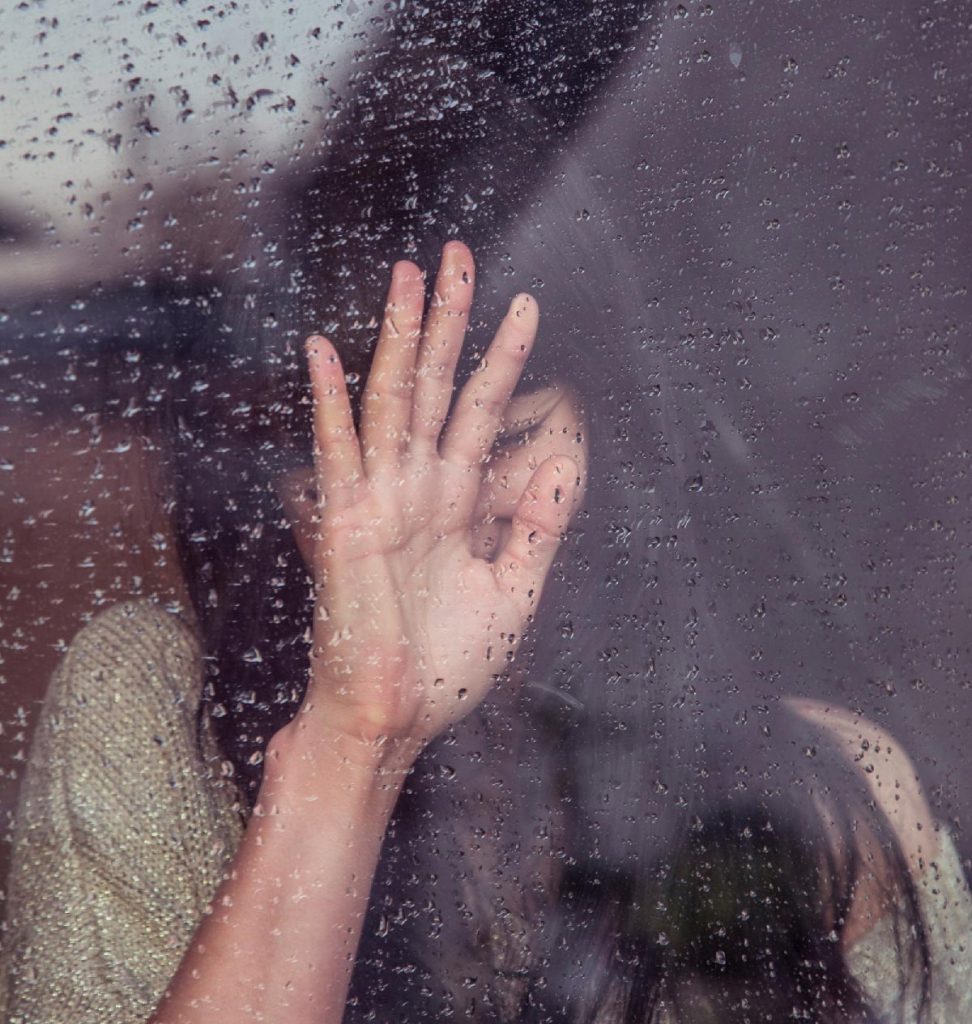 The Harvey Weinstein Pandora’s box of people who ran scared to his sexual atrocities is open.

At its core is the oppositional force of societal conditioning through decades. In one corner, men who feel they can do whatever they want to the satisfaction of their sexual drives. In the other corner, women shrinking. Hoping against hope that the abuse they suffer is a nightmare they can wake up from.

Of course it’s not all men or women, and of course, it’s a two-sentence generalization. But when you’re in the mix of that, it pretty much covers it.

The fear to stand up, in the moment, to connect with the sheer rage from a pompous man’s exploits overwhelms. There’s the knockdown of the surprise that it’s happening at all. Followed by the chains of indignity.

Any woman who has suffered abuse with that twist of sexual feels the re-triggering of emotions as the women come forward in Weinstein’s menagerie of abuse. Unfortunately, all too many of us have experienced our own stories. Doctors, co-workers, professors, bosses, and yes, Hollywood producers. It’s an unspoken nightmare women endure.

And then you are expected to chase it all with being put down for standing up. Weinstein’s most vocal critic, Rose McGowan had her Twitter account suspended. Comments are running strong with the comparison that the U.S. President can inflame tweet whenever he wants and Ms. McGowan gets shut down for expressing anger.

And, if you’ve never been through it, you can hate, but you can’t relate.

History tells us all too often, this is the country’s cycle of injustice. Rosa Parks, took her stand on the bus of segregation. In the aftermath, she lost her job and faced death threats because of it.

But I have a power story for you today.

Yesterday, I saw a woman break the rules. She expressed her power and her rage at the man deserving of it and here’s the kicker — she did it in the moment.

The very first moment she could, she did.

Lifeng Ye came from China to the U.S. last month to do the unimaginable. She came to find her abducted 26-year-old daughter, Ying Ying Zhang. Yingying went to the University of Illinois as a scholar to work.

Before leaving her homeland, this mother suffered. After hearing about her daughter’s abduction, she became ill and could not travel. Her torture showed on her face. Her tears. Her pain was palpable.

Watching her on the phone, every molecule of her felt the loss.

To make the trip to the USA, she had to get stronger. Her stomach hurt, she was not sleeping, she was not eating. She was so petite to begin with, family was worried.

The suspect, Brendt Christensen, age 28 was sitting in jail. The FBI said that he not only kidnapped Yingying, but he murdered her. He killed her after he sexually tortured her.

Christensen, with a Master’s degree in Physics, frequented various kidnapping and sexual torture sites according to the FBI findings. 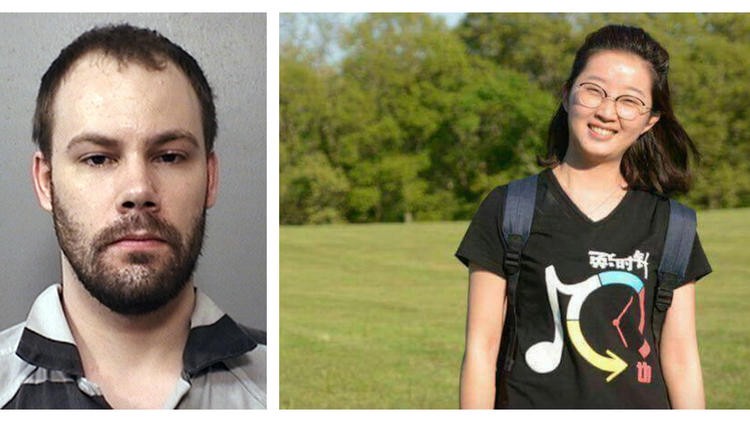 Not only is Brendt Christensen accused of Yingying’s demise, but he also attended her vigil on June 29. At the vigil, he was secretly tape recorded pointing out other women that he predicted he could kidnap and sexually torture.

This was 20 days after reportedly having his way with Yingying.

Finally, the mother was strong enough to make the flight to Illinois with her son, age 24. Lifeng arrived, and two days later she attended a press conference. This mother believed that her daughter was still alive. But at the press conference, the Chinese translator conveyed otherwise as she heard the University of Illinois Chancellor mumble a ‘sorry for your daughter Ying Yang’s loss.’ He called her Ying Yang instead of her name Yingying. Lifeng thought the press conference was to ‘keep searching for her daughter.’ She found out she’d get a little gift to commemorate her daughter’s loss.

Her pain turned to public wails. 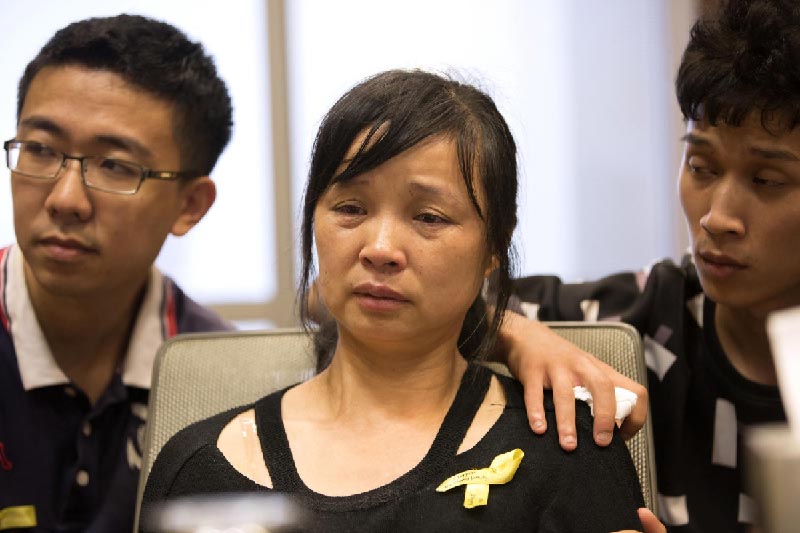 Some social media comments in the US and China did not take to Lifeng’s wailing. Again, if you’ve never been through it, you can hate, but you can’t relate.

This mother gained her strength again, with her hope that maybe Yingying was alive. Maybe the Chancellor got it wrong. Then, a few days ago, she happened upon Chinese media. She saw that the arraignment of the suspect, October 12, 2017 was for murder charges.

This petite 4’11” woman walked in without fanfare to the federal courthouse to the arraignment hearing yesterday. She walked past the Chinese media’s cameras. She entered and went through security, nodding and complying. I hugged her and could feel her sadness, yet her preparation for bracing what was to come.

She was going to see the man accused of taking her precious daughter from her.

She waited for the invitation into the federal courtroom. She was sad but holding it together.

The suspect entered without looking at the Chinese family gathered. He sat looking north. Lifeng sat looking west, at his profile and just 12 feet away.

Part of his charges included: committing the offense in an especially heinous, cruel or depraved manner in that it involved torture…”.

Brendt Christensen did not tremble. He knew he was there for formally listening to the murder charges. He was not stoic either.

This suspect, on video footage getting Yingying in his vehicle, and bragging to an informant that he killed her sat before us. There was an air of cockiness about him.

And then, it happened.

Right there, in a federal court. This tiny woman stood up — jumped up — from the bench we were on and started screaming in Chinese at the suspect. She pounded her fist so hard against the wood I thought she broke it.

You can’t imagine the sheer power of Lifeng. She was in that moment.

The family jumped up to calm her — four of them, and she tossed them off of her as though she had the strength of a 275-pound bodybuilder.

The armed guards came rushing in with their hands on their pistols. But they were disarmed by Lifeng.

She was wailing with rage heard throughout the building. She beat the bench again and tried to climb over the row in front of her.

Lifeng wanted to take the suspect out.

I stalled the guards and urged them to give her a moment. She deserved her moment. They said they were going to drag her out. I assured them we could resolve it.

I was so proud of Lifeng. In her anguish, she was exceptional.She was not going to lay down and take it. She was not going to wait until the system said she could speak when spoken to. Lifeng in that moment expressed what women who have suffered sexual outrage, and felt there was no one to care or believe them, wished they had the license to do.

She didn’t care about shrinking or fitting in or letting the authorities handle it.

She made her power known.

And you ask, what did the suspect do throughout this explosion?

He continued to stare straight ahead. Insolent. Not once did he turn to look at her.

Lifeng eventually did exit the courtroom, but her sobs outside the courtroom cut through the mahogany doors as though they were tissue paper.

Again, the suspect acted as though his name would be next for an interview.

When I went out to see Lifeng, her body couldn’t hold up. Through her wailing sobs she covered her mouth with her hand trying to contain herself as she writhed in the fetal position. In Chinese she pleaded, “I want my daughter back.”

That is what agony, rage and disgust looks like.

Lifeng was moved to the second floor with a video feed.

The judge read the federal indictment out loud. Every line. This was after the judge repeatedly inquired if the suspect was capable of understanding the proceedings.

Of interest? The suspect was able to maintain his looking straight ahead throughout Lifeng’s demonstration and for the majority of the indictment sentences.

But each time the judge read the charges “You intentionally killed YZ” guess what the suspect did?

He nodded in agreement. Not as though he agreed. It was subconscious bubbling up. Involuntary. He’d been able to sit still without head movement the entire time except for these sentences.

Perhaps that’s the only way sexual predator men can admit wrongdoing. Their subconscious has to do it for them.

Thank you for reading. A gift from me to you:

Get this: “The Rarely Revealed 5 Steps to Clarity” now